“There will be days when you don’t know whether you can run a marathon, but there will be a lifetime knowing that you have – impossible is nothing”

I’ll give a more detailed post soon about the pain of the marathon but suffice to say I managed to finish it. 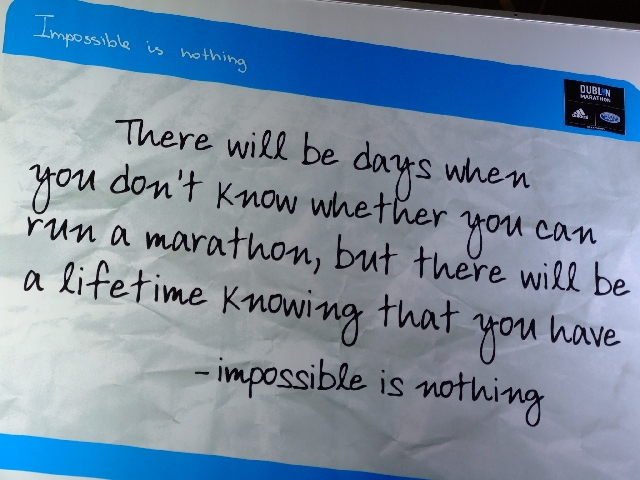 As some of you know I’m doing the marathon on Monday and I’m sh*tting myself already. I haven’t been able to train for the last 3 weeks because of an injury so I badly need something to compensate. I’m going with pain relief drugs, energy gels and some really kick ass tunes and possibly some cheating (with the aid of a moped or maybe a segway). Much appreciated if you can list the artist and title of some guaranteed music to speed me on my way (any genre).

Last weekend I completed my third triathlon (Llanrwst tri 2008) but this time it was in Wales (where I live now). It was a 400m swim in a very small 20m pool, 25km bike ride on a surprisingly hilly course and finally a 5km run on a very hilly course which was half road and half off-road in a forest. It was a great day and I was very happy with my times and my position (23rd/172). My speedo on my bike decided to stop showing me my speed so I had to rely on how much my thighs were burning and my Garmin 405 to know how I was doing. Pete’s Dad took the photo below of me coming out of the second transition and starting my run. Despite the smile my legs were on fire and felt like jelly after the bike.

Last year I competed in the Adidas Frank Duffy 10 mile race and came 487th overall. I’ve been training non-stop since then and last Saturday I did the same race again and came 143rd taking nearly 11 minutes off my time (1:04:44 this year). You can see from the photos below that it wasn’t an easy race to say the least 🙂 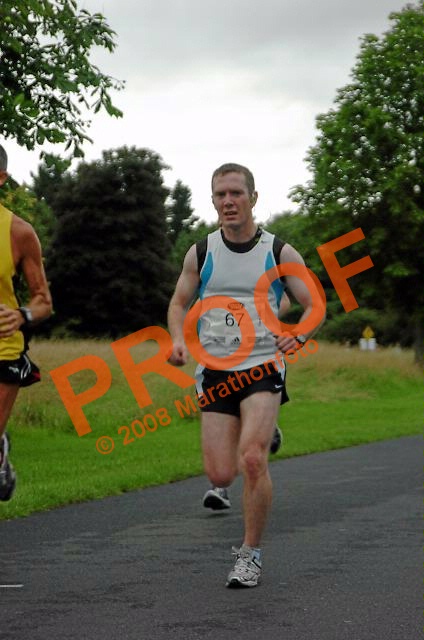 I ran with the guy on the left of the picture for about 3 miles before he lost me. I nearly caught him at the end though. 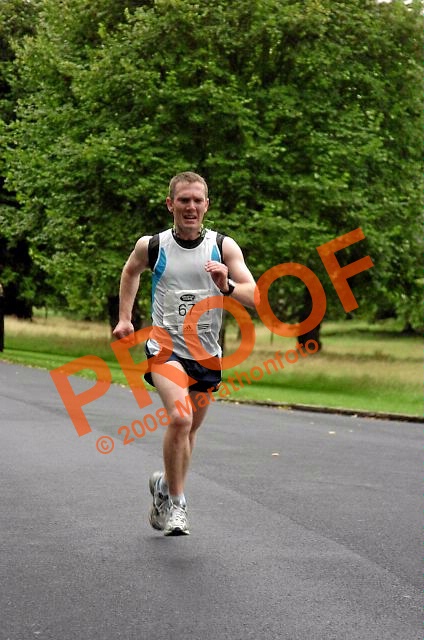 A sprint to the finish. 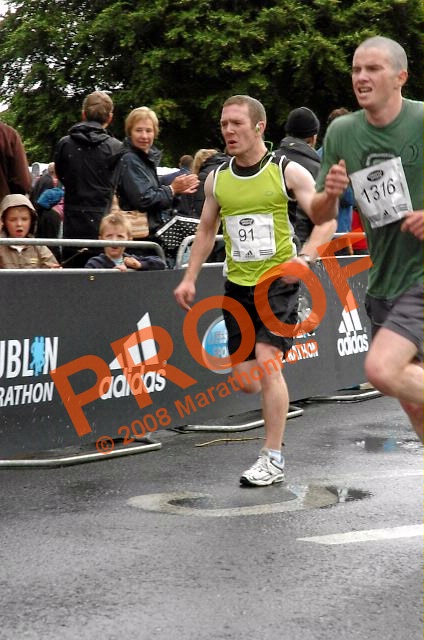 Next year I’ll be setting my sights on the top 100…… Bring on the marathon.

On another note, the proof watermark is there because marathonfoto.com want €25 for each photo…. OUTRAGEOUS!!!!!

On Sunday last myself and big Frank borrowed my mum’s car (as it has a hitch) and drove across to Leitrim with our bikes and butterflies in our bellies. Frank did the same race last year and said he really enjoyed and it was my first open water race. This was meant to be my first race but I managed to get a place in the Fingal Sprint in the last few days.

It was a great race but I was very very nervous before it as I had never swam that far in open water before. Even the swim to the starting line seemed daunting. The klaxon for the start of the swim went and pandemonium ensued. Most people were forcing their way forward but I think I was the only one pushing people in front of me to try and get as far back as I could. I took it very easy stopping to breast stroke every 30-50 metres to catch my breath. I finally made it to the bike transition (somehow managing to take a minute off my Fingal swim time). It was no wonder the swim was so sluggish when you consider my wetsuit filled with water – thanks Lidl!!!.

I danced and fumbled my way out of my suit and onto my bike and and off down the road. It was a tough bike ride with plenty of hills but I got a good time (taking a minute off Fingal again). The transition from bike to run was easier this time as I had remembered to tie my laces before the race this time. I had a good week of running training before the race and knew I could make some time on the run. That I did – coming tenth over all on the run leg of the race.

As you can see my swim needs ALOT of work.

Frank came 34th overall, only 4 outside his personal goal for this year of being in top 20%. The bottom photo is Mark – Sarahs boyfriend who did his first official tri coming an amazing 33rd.

One thing I did learn from the race was that I didn’t eat enough carbs after as I got a little too tipsy too easily on Sunday night and I had a huge sugar low on Monday morning (I was the laughing stock at training) which was quickly fixed with two lion bars, a moro, a pack of skittles and a bottle of Pepsi – I still feel like crap two days later. I haven’t eaten that much sugar in months. 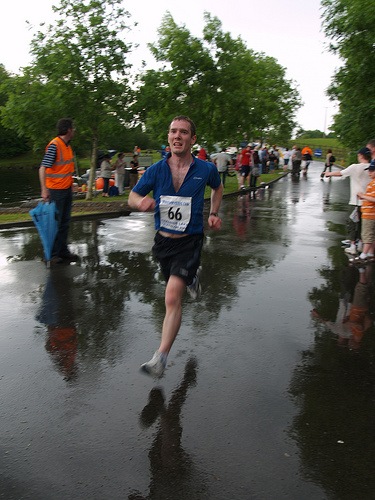 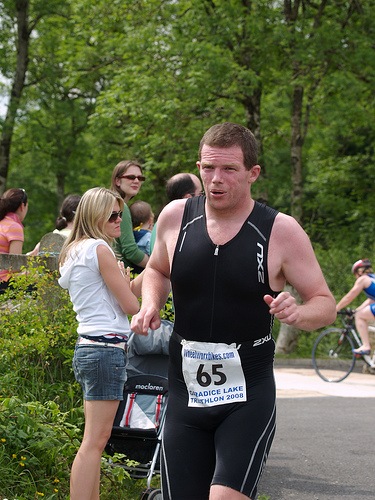 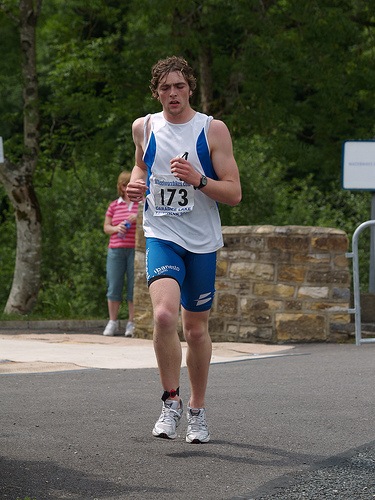 3dtri took 444 photos of the event and they’re all up on flickr.

This year Frank convinced me to join him in training for a sprint triathlon. I agreed and last weekend was my first (fingalsprint.3dtri.com). It was tough – real tough. I’m not a strong swimmer and I was punished severally in the swim – somehow I was placed in the fast group and ended up being the very very last person in the pool (funny when you look back on it).

I then ran out and after numerous failed attempts managed to get changed (at one stage I had my head and my arm out my head hole on my shirt). I jumped on my bike and cycled as hard as I ever have all the way from the NAC to Kilbride (near where I live) and back. Then it was attempting to change again and with adrenaline racing through me, it wasn’t easy. 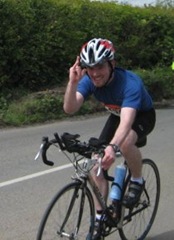 After the 20km bike is the 5km run and it is the weirdest feeling ever, to run after pushing yourself on the bike – it’s like floating on air but really really slowly and it took about 1km before I managed to get anything like a reasonable pace going. 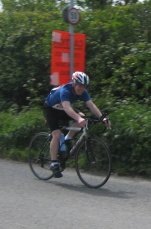 The official results are not out yet but I’m very chuffed with finishing and especially finishing the swim (I’d never done the 750m before with the pool in 50m mode). Frank got his time and it was a whopping 9 minutes or so faster than his time last year – well done dude (watch out next year – maybe I’ll be able to dress myself properly by then).

I don’t know how people do Iron Man competitions and the like, my hat goes off to them. Awesome stuff.

We’ve got another one @ Lake Garadice in a couple of weeks so it’s back training tonight. After that it’s all about the Dublin marathon. ps. The photos are courtesy of my mum who waited at the bike turning point for both myself and Frank. 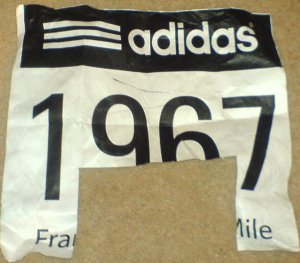 I’ve been back in Ireland for about 4 months and I’ve been trying to get fit and in shape for about 2 and a half of those. I’ve been playing ball and gyming it up as much as I can. On my week off I ran (12km) quite a few times too.

I read last week that Derek Featherstone (and his wife) has set himself the goal of competing in an Iron Man competition. Needless to say I was very impressed. I was also somewhat inspired and figured I too need a goal instead of simply “getting fit”. So I did a quick Google search on “dublin marathon” and was presented with the adidasdublinmarathon.ie site , hmm end of October – that’s a bit soon. However there was a 10 mile race this weekend as training for those attempting to do the main event. So I arrived up on Saturday morning in Phoenix park (after hiding away on Friday night) and did it.

My race number was 1967. My official time was 1 hour 16 minutes and 50 seconds. I was 487th overall (the winner’s time was 50 minutes and 35 seconds (wow!) and from what I can find out there was over 2000 runners). I am very pleased as it’s the longest run I have ever done and I was able to keep and beat my planned pace. One problem though was the whole nipple situation, I didn’t know that distances like that tear the bejaysus out of your nipples if you don’t take precautions – I didn’t and it’s painful. I’ll know for next time.

I won’t be doing the main marathon as two months is not enough time to train but maybe next year.