I haven’t updated my gallery @ halfviking.com since September so this weekend I uploaded all my New Year, Christmas, Frank and Nic’s wedding, Franks Stag, Marathon and visits to Clare photos as well as updating my Colwyn Bay gallery. Plenty of fun photos there… enjoy. 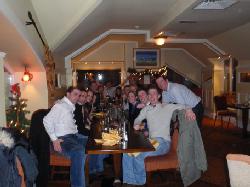 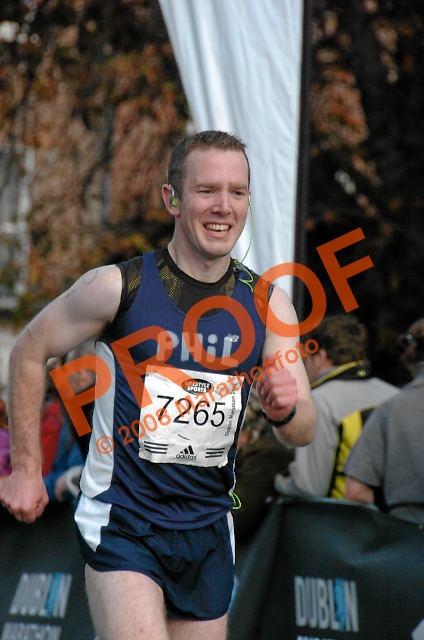 As mentioned before I managed to finish the Dublin marathon last Monday. It was a gruelling experience. I wasn’t able to run at all in the three/ four weeks leading up to the race due to an injury sustained in the half marathon. 8 physio sessions later and with a wallet a lot lighter race day came upon me.

I carbed up the days before the race and got plenty of liquids on board too and felt quite good apart from the knowledge that my knee was still not 100%. My physio said that I should take 4 Ibuprofen before the race to help with the knee but I have a nervous tummy and didn’t want to risk ibuprofen, instead I took two solpadine and was going to take another two just before the race….. that stuff is vile!!!!! so I only managed the first two.

My mum drove me in on race morning and waited around with me while I stretched and warmed up (my warm up run felt great so I was gunning for a good race).

I bullied my way to about 8 rows from the front of the runners as there is nothing worse than trying to get by people on race start (as I found in the 10 mile race earlier in the year). I was crazy nervous but some Al Pacino “Inches” calmed me down just before the starting gun went. I tore off with the runners so I wouldn’t get trampled and soon settled into my desired pace which was between 6.30 and 6.50 minutes per mile. I felt great and was really flying with a 41:54 10km split.

However soon after 10 miles my knee (specifically the soleus muscle) started to flare up big time. 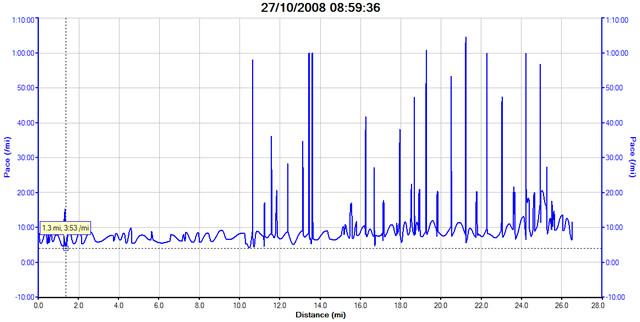 You can see from the graph (my Garmin forerunner 405 worked a treat) where it all went wrong. People talk of the “wall” so I thought maybe the pain was the “wall” and not my knee, I tried battling through but no such luck. My legs felt good so I was mega pissed off but figured if I stopped and stretched every now and again I would be OK and still get an acceptable time.

I battled on stopping every km to stretch and walk. I stopped for an aided stretch with my mates at 12 miles (cheers Paddy) and also with a physio about 13. My dad was at 21 miles so I stopped and took on some glucose with him, The sugars didn’t last long as I had to sit/ lie down on the kerb at 23. My sugar levels were very low and I felt very faint. A very VERY hot FM104 lady gave me three small bags of Haribo which I wolfed down and shuffled off again. She was really hot!!

The last few miles were pure agony with every muscle cramping up. I saw Brian and Carol at the approach to the finish which gave me a boost but then I saw my Mum’s Norwegian flag waving furiously which gave me a huge burst of energy and sprinted to the finish line crossing in 4 hours and 7 minutes and 52 seconds. Nearly an hour later than expected (my eventual goal is 3.15 to 3.30) but I was just sooooo happy to finish it.

To redeem myself I have signed up for a 10km before Christmas, a half marathon in March and I might have secured myself a place in the late April London marathon (I’ll be hitting you all up for sponsorship for that one).

The crowd were amazing and thanks to my friends and family that came out to support me… It really did help. Thanks to all the strangers that shouted my name (painted on my shirt) and to those who handed out sweets and drinks. It was a great day despite experiencing worlds of pain I had never even dreamt of.

Thanks to all and well done to all finishers!!!!!

Speed statistics for the race. The sharp increase around 1.5 miles has to be a GPS glitch as I definitely did not run at 4.21 pace at any stage. 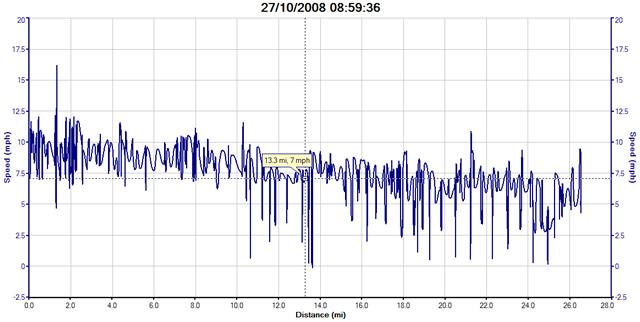 Race statistics, I would have thought I’d used more than 2880 calories, it certainly felt like it.

What would I do differently: 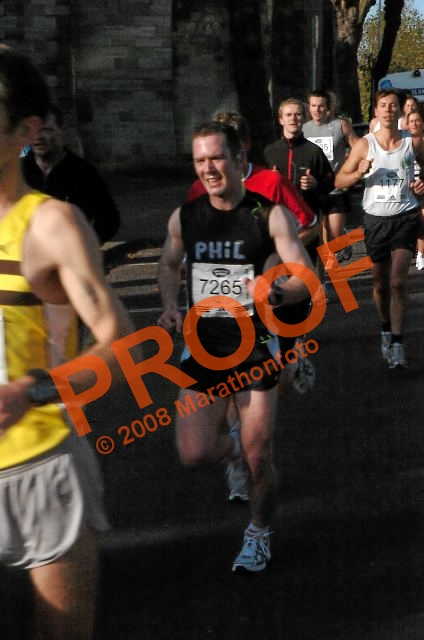 I posted a reply on the boards.ie Dublin Marathon 2008 thread and through I’d cross post here.

Hi guys, I’ve not read all the posts yet but well done to all. It was a great day.

It was my first and with a injury from the half marathon I struggled across in 4.07, sooooo happy to finish.

Throughout the whole adidas series I’ve been outraged at the price of the marathonfoto.com photos, €25 per download is insane!! You can get a CD with all your photos for €35 (which makes no sense at all) but you’ve got to wait about two weeks for that.

So in the interim I’ve managed to sniff the url for the higer res images (used in the flash based image cropper [which they seem to have disabled for this race]).

If your thumbnail page URL is

you need to extract the customer number from it, mine is S24G12.

When viewing this page you can see all your photos with a number to the right. This is the photos number. The first one on my page is 55798583.

Where you replace S24G12 with your customer number and 55798583 with your photo number.

I hope the above is useful 🙂

Finally, I don’t want to be too negative so I will say that marathonfoto.com is a great service but your thumbnails suck and your pricing model is bizarre. I have officially complained to them and they will be getting €35 from me when they’ve completed the identification of the race.

“There will be days when you don’t know whether you can run a marathon, but there will be a lifetime knowing that you have – impossible is nothing”

I’ll give a more detailed post soon about the pain of the marathon but suffice to say I managed to finish it.

As some of you know I’m doing the marathon on Monday and I’m sh*tting myself already. I haven’t been able to train for the last 3 weeks because of an injury so I badly need something to compensate. I’m going with pain relief drugs, energy gels and some really kick ass tunes and possibly some cheating (with the aid of a moped or maybe a segway). Much appreciated if you can list the artist and title of some guaranteed music to speed me on my way (any genre).