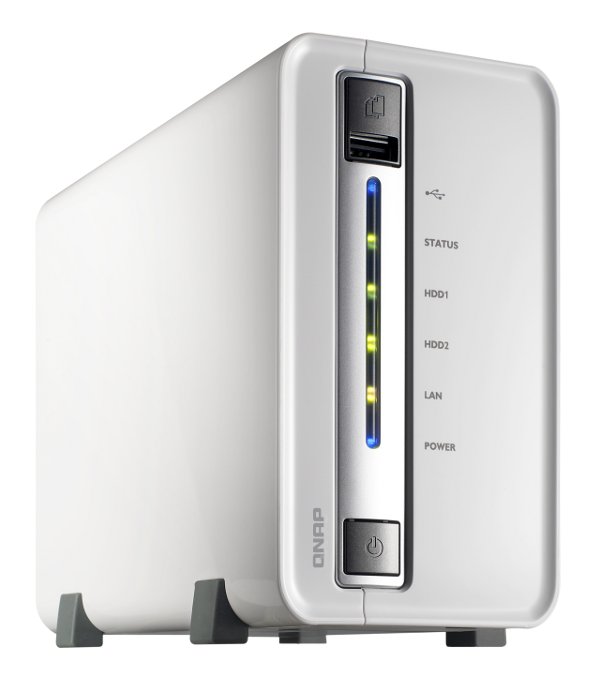 There was an email flying around last month on what to get a friend of mine for his 30th. We decided in the end for a PS3 but his brother suggested a QNAP NAS. I’d never seen any QNAP devices but as my Apple Time Capsule was starting to delete old backups due to disk space I decided to upgrade my backup drive. I went for the TS-212 from Amazon with two 2TB drives.

As always Amazon’s delivery was very prompt and as an extra surprise the NAS had two 1TB drives included. They were 7200rpm so I was tempted to leave them in but decided to throw the 2TB drives in for extra space.

Setup was a breeze using their QFinder utility. I configured the drive with RAID 1 which meant the drives were exact mirrors of each other. All went swimmingly with Samba shares, Bit-torrent downloads and Time Machine working really well. It was running for a few days copying silly amounts of data over to it when I decided to change the IP address of the device. I did this using QFinder rather than the web interface…. The device restart and nada – none of the services restarted. I couldn’t even ssh into it. Somehow the configuration had become corrupt. I tried hardware reset which partially worked as it changed the network configuration back to DHCP so I could now find it but I still couldn’t log in.

I contact their support which who brushed me off with a very quick reply, asking me to try a reset with drives removed and then try and restore the default configuration. This didn’t work, neither did the QNap live CD. Disaster.

I knew all the data was still on the drives so I mounted the data partition of one of the drives on my old desktop using an Ubuntu live CD and was able to copy all backed up data to another drive. I then formatted the 2TB drives and started the whole NAS set up once again. All worked well and is running smoothly now. I’ve yet to restart it but I have the configuration backed up now and I won’t be using QFinder’s network configuration update utility again.

Overall it’s an awesome piece of kit and I would recommend it but I felt a bit put out with support’s brush off. I’ve lost hours trying to get it back to it’s current state.

It’s much better value than an Apple Time Capsule and has buckets more features, my favourite of which are the remote SSH login, Time Machine support and the web interface.